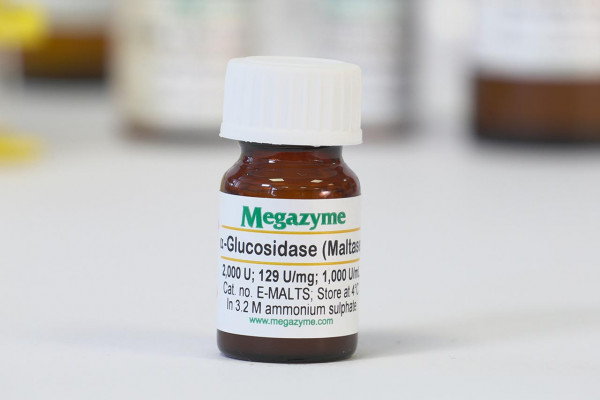 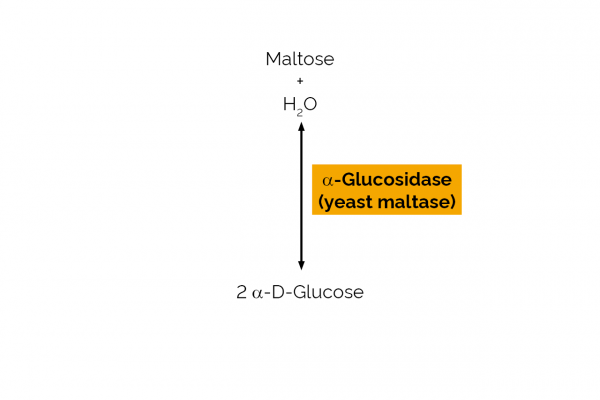 Show all of our CAZyme products.

Diastatic power and maltose value: a method for the measurement of amylolytic enzymes in malt.

A simple method for measurement of the amylolytic activity of malt has been developed and fully evaluated. The method, termed the Maltose Value (MV) is an extension of previously reported work. Here, the MV method has been studied in detail and all aspects of the assay (sample grinding and extraction, starch hydrolysis, maltose hydrolysis and determination as glucose) have been optimised. The method is highly correlated with other dextrinising power methods. The MV method involves extraction of malt in 0.5% sodium chloride at 30°C for 20 minutes followed by filtration; incubation of an aliquot of the undiluted filtrate with starch solution (pH 4.6) at 30°C for 15 min; termination of reaction with sodium hydroxide solution; dilution of sample in an appropriate buffer; hydrolysis of maltose with a specific α-glucosidase; glucose determination and activity calculation. Unlike all subsequent reducing sugar methods, the maltose value method measures a defined reaction product, maltose, with no requirement to use equations to relate analytical values back to Lintner units. The maltose value method is the first viable method in 130 years that could effectively replace the 1886 Lintner method.

Psychotria malayana Jack belongs to the Rubiacea and is widespread in Southeast Asian countries. It is traditionally used to treat diabetes. Despite its potential medicinal use, scientific proof of this pharmacological action and the toxic effect of this plant are still lacking. Hence, this study aimed to investigate the in vitro antidiabetic and antioxidant activities, toxicity, and preliminary phytochemical screening of P. malayana leaf extracts by gas chromatography-mass spectrometry (GC-MS) after derivatization. The antidiabetic activities of different extracts of this plant were investigated through alpha-glucosidase inhibitory (AGI) and 2-NBDG glucose uptake using 3T3-L1 cell line assays, while the antioxidant activity was evaluated using DPPH and FRAP assays. Its toxicological effect was investigated using the zebrafish embryo/larvae (Danio rerio) model. The mortality, hatchability, tail-detachment, yolk size, eye size, beat per minute (BPM), and body length were taken into account to observe the teratogenicity in all zebrafish embryos exposed to methanol extract. The LC50 was determined using probit analysis. The methanol extract showed the AGI activity (IC50 = 2.71 ± 0.11 μg/mL), insulin-sensitizing activity (at a concentration of 5 µg/mL), and potent antioxidant activities (IC50 = 10.85 μg/mL and 72.53 mg AAE/g for DPPH and FRAP activity, respectively). Similarly, the water extract exhibited AGI activity (IC50 = 6.75 μg/mL), insulin-sensitizing activity at the concentration of 10 μg/mL, and antioxidant activities (IC50 = 27.12 and 33.71 μg/mL for DPPH and FRAP activity, respectively). The methanol and water extracts exhibited the LC50 value higher than their therapeutic concentration, i.e., 37.50 and 252.45 µg/mL, respectively. These results indicate that both water and methanol extracts are safe and potentially an antidiabetic agent, but the former is preferable since its therapeutic index (LC50/therapeutic concentration) is much higher than for methanol extracts. Analysis using GC-MS on derivatized methanol and water extracts of P. malayana leaves detected partial information on some constituents including palmitic acid, 1,3,5-benzenetriol, 1-monopalmitin, beta-tocopherol, 24-epicampesterol, alpha-tocopherol, and stigmast-5-ene, that could be a potential target to further investigate the antidiabetic properties of the plant. Nevertheless, isolation and identification of the bioactive compounds are required to confirm their antidiabetic activity and toxicity.

Diurnal patterns of growth and transient reserves of sink and source tissues are affected by cold nights in barley.

Barley is described to mostly use sucrose for night carbon requirements. To understand how the transient carbon is accumulated and utilized in response to cold, barley plants were grown in a combination of cold days and/or nights. Both daytime and night cold reduced growth. Sucrose was the main carbohydrate supplying growth at night, representing 50–60% of the carbon consumed. Under warm days and nights, starch was the second contributor with 26% and malate the third with 15%. Under cold nights, the contribution of starch was severely reduced, due to an inhibition of its synthesis, including under warm days, and malate was the second contributor to C requirements with 24-28% of the total amount of carbon consumed. We propose that malate plays a critical role as an alternative carbon source to sucrose and starch in barley. Hexoses, malate, and sucrose mobilization and starch accumulation were affected in barley elf3 clock mutants, suggesting a clock regulation of their metabolism, without affecting growth and photosynthesis however. Altogether, our data suggest that the mobilization of sucrose and malate and/or barley growth machinery are sensitive to cold.

The present study used in vitro and in silico techniques, as well as the metabolomics approach to characterise α-glucosidase inhibitors from different fractions of Clinacanthus nutans. C. nutans is a medicinal plant belonging to the Acanthaceae family, and is traditionally used to treat diabetes in Malaysia. n-Hexane, n-hexane: ethyl acetate (1:1, v/v), ethyl acetate, ethyl acetate: methanol (1:1, v/v), and methanol fractions were obtained via partitioning of the 80% methanolic crude extract. The in vitro α-glucosidase inhibitory activity was analyzed using all the fractions collected, followed by profiling of the metabolites using liquid chromatography combined with mass spectrometry. The partial least square (PLS) statistical model was developed using the SIMCA P+14.0 software and the following four inhibitors were obtained: (1) 4,6,8-Megastigmatrien-3-one; (2) N-Isobutyl-2-nonen-6,8-diynamide; (3) 1′,2′-bis(acetyloxy)-3′,4′-didehydro-2′-hydro-β, ψ-carotene; and (4) 22-acetate-3-hydroxy-21-(6-methyl-2,4-octadienoate)-olean-12-en-28-oic acid. The in silico study performed via molecular docking with the crystal structure of yeast isomaltase (PDB code: 3A4A) involved a hydrogen bond and some hydrophobic interactions between the inhibitors and protein. The residues that interacted include ASN259, HID295, LYS156, ARG335, and GLY209 with a hydrogen bond, while TRP15, TYR158, VAL232, HIE280, ALA292, PRO312, LEU313, VAL313, PHE314, ARG315, TYR316, VAL319, and TRP343 with other forms of bonding.

Measurement of the distribution of non‐structural carbohydrate composition in onion populations by a high‐throughput microplate enzymatic assay.

Background: Non-structural carbohydrate (NSC; glucose, fructose, sucrose and fructan) composition of onions (Allium cepa L.) varies widely and is a key determinant of market usage. To analyse the physiology and genetics of onion carbohydrate metabolism and to enable selective breeding, an inexpensive, reliable and practicable sugar assay is required to phenotype large numbers of samples. Results: A rapid, reliable and cost-effective microplate-based assay was developed for NSC analysis in onions and used to characterise variation in tissue hexose, sucrose and fructan content in open-pollinated breeding populations and in mapping populations developed from a wide onion cross. Sucrose measured in microplates employing maltase as a hydrolytic enzyme was in agreement with HPLC-PAD results. The method revealed significant variation in bulb fructan content within open-pollinated ‘Pukekohe Longkeeper’ breeding populations over a threefold range. Very wide segregation from 80 to 600 g kg−1 in fructan content was observed in bulbs of F2 genetic mapping populations from the wide onion cross ‘Nasik Red × CUDH2150’. Conclusion: The microplate enzymatic assay is a reliable and practicable method for onion sugar analysis for genetics, breeding and food technology. Open-pollinated onion populations may harbour extensive within-population variability in carbohydrate content, which may be quantified and exploited using this method. The phenotypic data obtained from genetic mapping populations show that the method is well suited to detailed genetic and physiological analysis.

P-WAXYH
Arabinoxylan (Wheat Flour; High Viscosity)
Hide Message
We use cookies to give you the best possible experience on our site. By continuing to use the site you agree to our use of cookies. More information