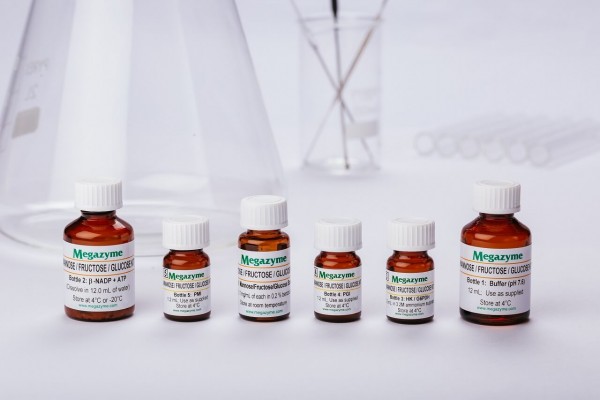 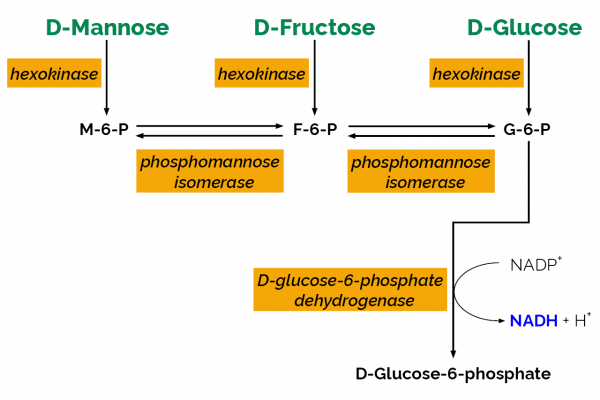 The D-Mannose/D-Fructose/D-Glucose test kit is suitable for the specific measurement and analysis of D-mannose, D-fructose and D-glucose in plant products and in acid hydrolysates of polysaccharides.

Note for Content: The number of manual tests per kit can be doubled if all volumes are halved.  This can be readily accommodated using the MegaQuantTM  Wave Spectrophotometer (D-MQWAVE).

Glycans are major nutrients available to the human gut microbiota (HGM). The Bacteroides are generalist glycan degraders and this function is mediated largely by polysaccharide utilization loci (PULs). The genomes of several Bacteroides species contain a PUL, PUL1,6-beta;-glucan, that was predicted to target mixed linked plant 1,3;1,4-beta-glucans. To test this hypothesis we characterized the proteins encoded by this locus in Bacteroides thetaiotaomicron, a member of the HGM. We show here that PUL1,6-β-glucan does not orchestrate the degradation of a plant polysaccharide but targets a fungal cell wall glycan, 1,6-beta-glucan, which is a growth substrate for the bacterium. The locus is upregulated by 1,6-beta-glucan, and encodes two enzymes, a surface endo-1,6-beta-glucanase, BT3312, and a periplasmic beta-glucosidase that targets primarily 1,6-beta-glucans. The non-catalytic proteins encoded by PUL1,6-beta-glucan target 1,6-beta-glucans and comprise a surface glycan binding protein and a SusD homologue that delivers glycans to the outer membrane transporter. We identified the central role of the endo-1,6-beta-glucanase in 1,6-beta-glucan depolymerization by deleting bt3312, which prevented the growth of B. thetaiotaomicron on 1,6-beta-glucan. The crystal structure of BT3312 in complex with β-glucosyl-1,6-deoxynojirimycin, revealed a TIM barrel catalytic domain that contains a deep substrate binding cleft tailored to accommodate the hook-like structure adopted by 1,6-beta-glucan. Specificity is driven by the complementarity of the enzyme active site cleft and the conformation of the substrate. We also noted that PUL1,6-beta-glucan is syntenic to many PULs from other Bacteroidetes suggesting that utilization of yeast and fungal cell wall 1,6-beta-glucans is a widespread adaptation within the human microbiota.

Use of almond shell as food ingredient.

Almond shell is a major waste from the almond processing industry. Its feasibility as natural source of health-promoting components was examined. The by-product was fractionated under basic conditions following an easy scale-up process. The chemical composition of the recovered fraction and its antioxidant and antidiabetic properties were evaluated. Novel information regarding the chemical composition of the polysaccharides was also obtained. Almond shell is formed by lignin-carbohydrate complexes possessing antioxidant properties and capacity to inhibit α-glucosidase. According to our knowledge, this is the first time α-glucosidase inhibitory activity of a lignin-carbohydrate complex is reported. Biscuits containing non-caloric sweetener soluble (2.5%) and insoluble (5.6%) dietary fiber, natural antioxidants (1.34 mg of gallic acid equivalents/g) and α-glucosidase inhibitors (1 g of biscuit–1 mg of acarbose) achieved a high sensorial score (7.2 out of 9) when almond shell was incorporated to them. The application of a fraction from almond shell containing lignin-polysaccharides complexes as food ingredient in biscuit formulations for people with particular nutritional requirements is feasible and new.

This paper presents the results of a study to determine the effect of Quillaja saponaria saponins on the lysis of industrial yeast strains. Cell lysis induced by saponin from Q. saponaria combined with the plasmolysing effect of 5% NaCl for Saccharomyces cerevisiae, Kluyveromyces marxianus yeasts biomass was conducted at 50 °C for 24-48 h. Membrane permeability and integrity of the yeast cells were monitored using fluorescent techniques and concentrations of proteins, free amino nitrogen (FAN) and free amino acids in resulting lysates were analyzed. Protein release was significantly higher in the case of yeast cell lysis promoted with 0.008% Q. saponaria and 5% NaCl in comparison to plasmolysis triggered by NaCl only.

The plant Selaginella moellendorffii possesses enzymes for synthesis and hydrolysis of the compatible solutes mannosylglycerate and glucosylglycerate.

A mannosylglycerate synthase (MgS) gene detected in the genome of Selaginella moellendorffii was expressed in E. coli and the recombinant enzyme was purified and characterized. A remarkable and unprecedented feature of this enzyme was the ability to efficiently synthesize mannosylglycerate (MG) and glucosylglycerate (GG) alike, with maximal activity at 50°C, pH 8.0 and with Mg2+ as reaction enhancer. We have also identified a novel glycoside hydrolase gene in this plant’s genome, which was functionally confirmed to be highly specific for the hydrolysis of MG and GG and named MG hydrolase (MgH), due to its homology with bacterial MgHs. The recombinant enzyme was maximally active at 40°C and at pH 6.0–6.5. The activity was independent of cations, but Mn2+ was a strong stimulator. Regardless of these efficient enzymatic resources we could not detect MG or GG in S. moellendorffii or in the extracts of five additional Selaginella species. Herein, we describe the properties of the first eukaryotic enzymes for the synthesis and hydrolysis of the compatible solutes, MG and GG.

The accumulation patterns and biosynthesis of compatible solutes in hyper/thermophiles have been extensively studied. However, there is little information available on their hydrolysis, leading us to search for enzymes for this activity. From the analysis of the genomes of several microorganisms known to accumulate α-D-mannopyranosyl-(1 → 2)-D-glycerate (mannosylglycerate, MG) or α-D-glucopyranosyl-(1 → 2)-D-glycerate (glucosylglycerate, GG) we were able to identify a likely candidate gene for the hydrolysis of these molecules. The Thermus thermophilus HB27 homologue encoded a putative enzyme with motifs of the GH63 and GH37 families of glycoside hydrolases. We expressed the gene from this thermophilic bacterium and from Rubrobacter radiotolerans, and confirmed that the recombinant enzymes, here designated mannosylglycerate hydrolase (MgH), specifically hydrolysed MG (or GG) to mannose (or glucose) and glycerate. Both enzymes were highly stable and maximally active at temperatures close to each organisms’ optimal growth temperatures (half-lives of 15.4 ± 0.5 h at 55°C and 16.1 ± 0.4 h at 70°C) but at low pH (4.0–4.5). Cations were not required for their activity and each enzyme exhibited Michaelis–Menten kinetics at 50°C and 70°C, respectively, with comparable catalytic efficiencies towards MG and GG. Herein, we purified and characterized a novel and highly specific MG- and GG-hydrolyzing enzyme that represent an attractive tool for development of enzymatic assays for quantification of these solutes, which seem to be more prevalent in microorganisms than initially suspected.

The molecular characterization of a novel GH38 α-mannosidase from the crenarchaeon Sulfolobus solfataricus revealed its ability in de-mannosylating glycoproteins.

α-Mannosidases, important enzymes in the N-glycan processing and degradation in Eukaryotes, are frequently found in the genome of Bacteria and Archaea in which their function is still largely unknown. The α-mannosidase from the hyperthermophilic Crenarchaeon Sulfolobus solfataricus has been identified and purified from cellular extracts and its gene has been cloned and expressed in Escherichia coli. The gene, belonging to retaining GH38 mannosidases of the carbohydrate active enzyme classification, is abundantly expressed in this Archaeon. The purified α-mannosidase activity depends on a single Zn2+ ion per subunit is inhibited by swainsonine with an IC50 of 0.2 mM. The molecular characterization of the native and recombinant enzyme, named Ssα-man, showed that it is highly specific for α-mannosides and α(1,2), α(1,3), and α(1,6)-D-mannobioses. In addition, the enzyme is able to demannosylate Man3GlcNAc2 and Man7GlcNAc2 oligosaccharides commonly found in N-glycosylated proteins. More interestingly, Ssα-man removes mannose residues from the glycosidic moiety of the bovine pancreatic ribonuclease B, suggesting that it could process mannosylated proteins also in vivo. This is the first evidence that archaeal glycosidases are involved in the direct modification of glycoproteins.

The effects of vapor pressure deficit (VPD) on litchi fruit quality have not yet been fully defined. The aim of this study was to detail the changes in physiology, sugars, organic acids, and individual anthocyanin concentrations in imported litchi fruit held at various controlled relative humidity (RH) and VPD levels. SO2-fumigated (but not acid-treated) litchi imported from Thailand (cv. Kom) and from Israel (cv. Mauritius) were air freighted to the United Kingdom and then stored for 9 days at either 5 or 13°C to simulate shelf-life conditions. Fruits were stored under a series of controlled RH conditions for the duration of the trial using different concentrations of glycerol in deonized water. Respiration rates and weight losses of both fruit lots were greater in litchi stored at 13°C and a VPD of 0.274 kPa. At 5°C and a VPD of 0 or 0.042 kPa, sugars and organic acids in aril and pericarp tissue and individual anthocyanins in pericarp were better maintained. This is the first piece of work that has systematically evaluated the effect of a series of VPDs on litchi fruit biochemistry such that implications for designing systems to better maintain the physiological quality of imported litchi fruit are discussed.

K-RINTDF
Rapid Integrated Total Dietary Fiber Assay Kit
Hide Message
We use cookies to give you the best possible experience on our site. By continuing to use the site you agree to our use of cookies. More information