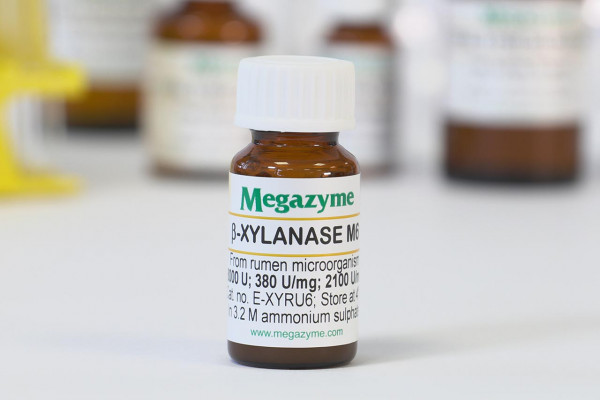 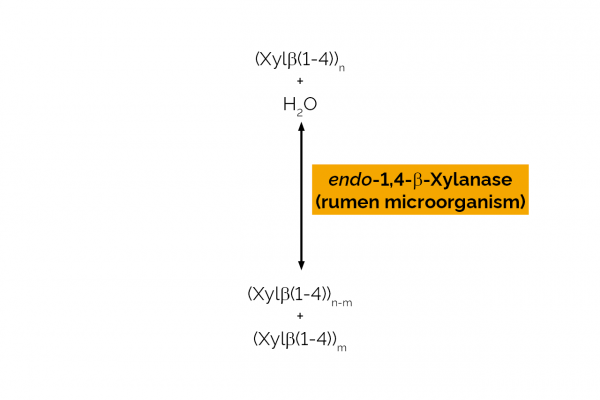 This product has been discontinued (read more).

Novel substrates for the automated and manual assay of endo-1,4-β-xylanase.

endo-1,4-β-Xylanase (EC 3.2.1.8) is employed across a broad range of industries including animal feed, brewing, baking, biofuels, detergents and pulp (paper). Despite its importance, a rapid, reliable, reproducible, automatable assay for this enzyme that is based on the use of a chemically defined substrate has not been described to date. Reported herein is a new enzyme coupled assay procedure, termed the XylX6 assay, that employs a novel substrate, namely 4,6-O-(3-ketobutylidene)-4-nitrophenyl-β-45-O-glucosyl-xylopentaoside. The development of the substrate and associated assay is discussed here and the relationship between the activity values obtained with the XylX6 assay versus traditional reducing sugar assays and its specificity and reproducibility were thoroughly investigated.

Arabinoxylans-enriched fractions: From dry fractionation of wheat bran to the investigation on bread baking performance.

Arabinoxylans-(AX-) enriched fractions were separated from wheat bran by dry fractionation and utilized for fiber fortification in bread. The obtained AX-enriched fractions (AXF) contained 39.2-55.8% arabinoxylans (dry basis). To produce bread with various AX-fortification levels, wheat flour was partially replaced with AXF in the recipe, i.e., 2%, 5% and 10% of flour weight. Results indicate 10% AX fortification led to decreased specific volume, harder and coarser crumb and darker color of bread, while 2% and 5% showed no significant influence. Next, the bread recipe was adjusted based on Farinograph water absorption and the AXF was pre-soaked in water (with or without xylanase) at 40°C for 16 h before dough mixing. The recipe and process adjustment reduced the detrimental effects of a high-level AX-fortification on bread quality. Bread with 10% AXF showed comparable quality properties as the control and its fiber content (11.75% dry basis) was found twice higher than the control (5.48% dry basis). However, usage of xylanase did not further improve the bread quality under tested conditions. In conclusion, this study shows that AX-enriched fractions from wheat bran have valorization potential for application in food.

We demonstrate the enhancement of intestinal mucin (Muc2) binding to plant cell wall structures from fruit (parenchymal apple tissue) and grain (wheat endosperm) mediated by soluble dietary fibers embedded within cellulose networks. Mucin binding occurs through two distinct mechanisms; for pectin polysaccharides characteristic of fruits and vegetables, it is governed by molecular mucoadhesive interactions, while for neutral polysaccharides, arabinoxylan and β-glucan characteristic of cereal grains, the interaction stems from the properties of their polymer network. Based on microrheological and microscopic measurements, we show that neutral dietary fiber polysaccharides do not adhere to intestinal mucin, but are capable of disrupting the mucin network, which facilitates interpenetration of mucin molecules into the polysaccharide mesh. This effect becomes significant in the context of ‘whole foods’, where soluble fibers are incorporated within the gel-like matrix of cellulose-reinforced plant cell wall structures. The result of mucoadhesion assay and analysis of microscopy images points to the critical role of entanglements between mucin and polysaccharides as a lock-in mechanism preventing larger mucin from escaping out of plant cell wall structures. These results provide the first indication that non-pectin soluble dietary fiber may influence mucosal interactions, mucus barrier properties, and transmucosal transport of nutrients.

Ferulic acid esterases (FAE, EC. 3.1.1.73) hydrolyse the linkage between hemicellulose and lignin and thus have potential for use in mild enzymatic pretreatment of biomass as an alternative to thermochemical approaches. Here, we report the characterization of a novel FAE (ActOFaeI) obtained from the bacterium, Actinomyces sp. oral which was recombinantly expressed in Escherichia coli BL21 in two forms: with and without its putative signal peptide. The truncated form was found to have p-coumarate, with specific activities of 477.6 and 174.4 U mg-1 respectively, than the equivalent activities of the benchmark FAE from Aspergillus niger A and B. ActOFaeI retained activity over a broad pH range with a maximum at 9 but >90 % relative activity at pH 6.5 and an optimum reaction temperature of 30 C. ActOFaeI increased activity by 15 % in high salt conditions (1000 mM NaCl) and its thermal unfolding temperature improved from 41.5°C in standard buffer to 74°C in the presence of 2500 mM sodium malonate. ActOFaeI also released ferulic acid from destarched wheat bran when combined with a xylanase preparation. After treatment above the thermal denaturation temperature followed by cooling to room temperature, ActOFaeI demonstrated spontaneous refolding into an active state. ActOFaeI displays many useful characteristics for enzymatic pretreatment of lignocellulose and contributes to our understanding of this important family.

The plant cell wall has many significant structural and physiological roles, but the contributions of the various components to these roles remain unclear. Modification of cell wall properties can affect key agronomic traits such as disease resistance and plant growth. The plant cell wall is composed of diverse polysaccharides often decorated with methyl, acetyl, and feruloyl groups linked to the sugar subunits. In this study, we examined the effect of perturbing cell wall acetylation by making transgenic Arabidopsis (Arabidopsis thaliana) and Brachypodium (Brachypodium distachyon) plants expressing hemicellulose- and pectin-specific fungal acetylesterases. All transgenic plants carried highly expressed active Aspergillus nidulans acetylesterases localized to the apoplast and had significant reduction of cell wall acetylation compared with wild-type plants. Partial deacetylation of polysaccharides caused compensatory up-regulation of three known acetyltransferases and increased polysaccharide accessibility to glycosyl hydrolases. Transgenic plants showed increased resistance to the fungal pathogens Botrytis cinerea and Bipolaris sorokiniana but not to the bacterial pathogens Pseudomonas syringae and Xanthomonas oryzae. These results demonstrate a role, in both monocot and dicot plants, of hemicellulose and pectin acetylation in plant defense against fungal pathogens.

Analysis of the arabinoxylan arabinofuranohydrolase gene family in barley does not support their involvement in the remodelling of endosperm cell walls during development.

Arabinoxylan arabinofuranohydrolases (AXAHs) are family GH51 enzymes that have been implicated in the removal of arabinofuranosyl residues from the (1,4)-β-xylan backbone of heteroxylans. Five genes encoding barley AXAHs range in size from 4.6 kb to 7.1 kb and each contains 16 introns. The barley HvAXAH genes map to chromosomes 2H, 4H, and 5H. A small cluster of three HvAXAH genes is located on chromosome 4H and there is evidence for gene duplication and the presence of pseudogenes in barley. The cDNAs corresponding to barley and wheat AXAH genes were cloned, and transcript levels of the genes were profiled across a range of tissues at different developmental stages. Two HvAXAH cDNAs that were successfully expressed in Nicotiana benthamiana leaves exhibited similar activities against 4-nitrophenyl α-L-arabinofuranoside, but HvAXAH2 activity was significantly higher against wheat flour arabinoxylan, compared with HvAXAH1. HvAXAH2 also displayed activity against (1,5)-α-L-arabinopentaose and debranched arabinan. Western blotting with an anti-HvAXAH antibody was used to define further the locations of the AXAH enzymes in developing barley grain, where high levels were detected in the outer layers of the grain but little or no protein was detected in the endosperm. The chromosomal locations of the genes do not correspond to any previously identified genomic regions shown to influence heteroxylan structure. The data are therefore consistent with a role for AXAH in depolymerizing arabinoxylans in maternal tissues during grain development, but do not provide compelling evidence for a role in remodelling arabinoxylans during endosperm or coleoptile development in barley as previously proposed.

Identification of quantitative trait loci affecting hemicellulose characteristics based on cell wall composition in a wild and cultivated rice species.

Cell wall hemicellulosic polysaccharides are structurally complex and diverse. Knowledge about the synthesis of cell wall hemicelluloses and their biological roles is limited. Quantitative trait loci (QTL) mapping is a helpful tool for the dissection of complex phenotypes for gene identification. In this study, we exploited the natural variation in cell wall monosaccharide levels between a common wild rice, Yuanj, and an elite indica cultivar, Teqing, and performed QTL mapping with their introgression lines (ILs). Chemical analyses conducted on the culms of Yuanj and Teqing showed that the major alterations are found in glucose and xylose levels, which are correlated with specific hemicellulosic polymers. Glycosidic linkage examination revealed that, in Yuanj, an increase in glucose content results from a higher level of mixed linkage β-glucan (MLG), whereas a reduction in xylose content reflects a low level of xylan backbone and a varied arabinoxylan (AX) structure. Seventeen QTLs for monosaccharides have been identified through composition analysis of the culm residues of 95 core ILs. Four major QTLs affecting xylose and glucose levels are responsible for 19 and 21% of the phenotypic variance, respectively. This study provides a unique resource for the genetic dissection of rice cell wall formation and remodeling in the vegetative organs.

Regulation of the cellulose synthase-like gene family by light in the maize mesocotyl.

The cellulose synthase-like (ZmCSL) gene family of maize was annotated and its expression studied in the maize mesocotyl. A total of 28 full-length CSL genes and another 13 partial sequences were annotated; four are predicted to be pseudogenes. Maize has all of the CSL subfamilies that are present in rice, but the CSLC subfamily is expanded from 6 in rice to 12 in maize, and the CSLH subfamily might be reduced from 3 to 1. Unlike rice, maize has a gene in the CSLG subfamily, based on its sequence similarity to two genes annotated as CSLG in poplar. Light regulation of glycan synthase enzyme activities and CSL gene expression were analyzed in the mesocotyl. A Golgi-localized glucan synthase activity is reduced by ~50% 12 h after exposure to light. Β-1,4-Mannan synthase activity is reduced even more strongly (>85%), whereas Β-1,4-xylan synthase, callose synthase, and latent IDPase activity respond only slightly, if at all, to light. At least 17 of the CSL genes (42%) are expressed in the mesocotyl, of which four are up-regulated at least twofold, seven are down-regulated at least twofold, and six are not affected by light. The results contribute to our understanding of the structure of the CSL gene family in an important food and biofuel plant, show that a large percentage of the CSL genes are expressed in the specialized tissues of the mesocotyl, and demonstrate that members of the CSL gene family are differentially subject to photobiological regulation.

The use of Xylanases from different microbial origin in bread baking and their effects on bread qualities.

Effects of xylanases on bread quality were examined. Enzymes used were endo-xylanase (EC 3.2.1.8) from different sources of microorganisms. Baked loaves were assessed for Loaves volume, colour and staling rate. Xylanases produced from rumen microorganisms M6 had clearly positive effects on loaf volume of bread as well as anti-firming potential. M3 (produced from Trichoderma longibrachiatum) improved crumb softness. The use of xylanase for breadmaking lowered firmness of bread crumb effectively compared with control loaf. It can be summarized that xylanases had significant positive effects on bread characteristics. In particular, they had advantage in retarding the staling rate of bread. It is recommended that the optimum dosage of enzymes, method of application in industrial scale especially with xylanase should be studied further in order to gain the great advantages of enzyme addition in breadmaking.

Emergence of a subfamily of xylanase inhibitors within glycoside hydrolase family 18.

The xylanase inhibitor protein I (XIP-I), recently identified in wheat, inhibits xylanases belonging to glycoside hydrolase families 10 (GH10) and 11 (GH11). Sequence and structural similarities indicate that XIP-I is related to chitinases of family GH18, despite its lack of enzymatic activity. Here we report the identification and biochemical characterization of a XIP-type inhibitor from rice. Despite its initial classification as a chitinase, the rice inhibitor does not exhibit chitinolytic activity but shows specificities towards fungal GH11 xylanases similar to that of its wheat counterpart. This, together, with an analysis of approximately 150 plant members of glycosidase family GH18 provides compelling evidence that xylanase inhibitors are largely represented in this family, and that this novel function has recently emerged based on a common scaffold. The plurifunctionality of GH18 members has major implications for genomic annotations and predicted gene function. This study provides new information which will lead to a better understanding of the biological significance of a number of GH18 ‘inactivated’ chitinases.

E-PCLYAN
Pectate Lyase (Aspergillus sp.)
Hide Message
We use cookies to give you the best possible experience on our site. By continuing to use the site you agree to our use of cookies. More information