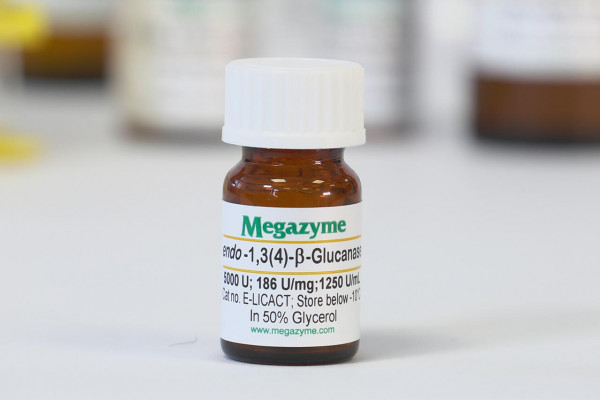 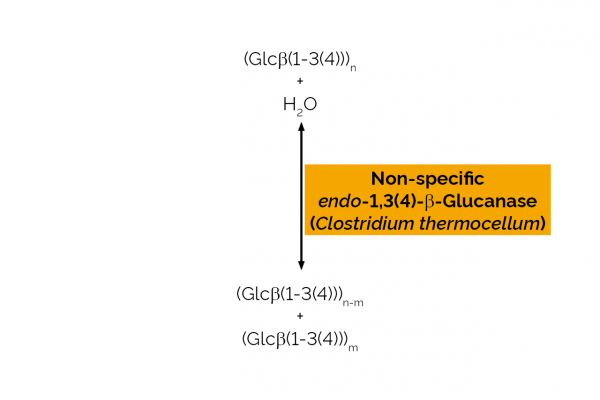 Novel approaches to the automated assay of β-glucanase and lichenase activity.

We report herein the development of a novel assay procedure for the measurement of β-glucanase and lichenase (EC 3.2.1.73) in crude enzyme extracts. Two assay formats based on a) a direct cleavage or b) an enzyme coupled substrate were initially investigated. The ‘direct cleavage’ substrate, namely 4,6-O-benzylidene-2-chloro-4-nitrophenyl-β-31-cellotriosyl-β-glucopyranoside (MBG4), was found to be the more generally applicable reagent. This substrate was fully characterised using a crude malt β-glucanase extract, a bacterial lichenase (Bacillus sp.) and a non-specific endo-1,3(4)-β-glucanase from Clostridium thermocellum (EC 3.2.1.6). Standard curves were derived that allow the assay absorbance response to be directly converted to β-glucanase/lichenase activity on barley β-glucan. The specificity of MBG4 was confirmed by analysing the action of competing glycosyl hydrolases that are typically found in malt on the substrate. Manual and automated assay formats were developed for the analysis of a) β-glucanase in malt flour and b) lichenase enzyme extracts and the repeatability of these assays was fully investigated.

Analysis and application of a suite of recombinant endo-β (1, 3)-D-glucanases for studying fungal cell walls.

Background: The fungal cell wall is an essential and robust external structure that protects the cell from the environment. It is mainly composed of polysaccharides with different functions, some of which are necessary for cell integrity. Thus, the process of fractionation and analysis of cell wall polysaccharides is useful for studying the function and relevance of each polysaccharide, as well as for developing a variety of practical and commercial applications. This method can be used to study the mechanisms that regulate cell morphogenesis and integrity, giving rise to information that could be applied in the design of new antifungal drugs. Nonetheless, for this method to be reliable, the availability of trustworthy commercial recombinant cell wall degrading enzymes with non-contaminating activities is vital. Results: Here we examined the efficiency and reproducibility of 12 recombinant endo-β(1,3)-D-glucanases for specifically degrading the cell wall β(1,3)-D-glucan by using a fast and reliable protocol of fractionation and analysis of the fission yeast cell wall. This protocol combines enzymatic and chemical degradation to fractionate the cell wall into the four main polymers: galactomannoproteins, α-glucan, β(1,3)-D-glucan and β(1,6)-D-glucan. We found that the GH16 endo-β(1,3)-D-glucanase PfLam16A from Pyrococcus furiosus was able to completely and reproducibly degrade β(1,3)-D-glucan without causing the release of other polymers. The cell wall degradation caused by PfLam16A was similar to that of Quantazyme, a recombinant endo-β(1,3)-D-glucanase no longer commercially available. Moreover, other recombinant β(1,3)-D-glucanases caused either incomplete or excessive degradation, suggesting deficient access to the substrate or release of other polysaccharides. Conclusions: The discovery of a reliable and efficient recombinant endo-β(1,3)-D-glucanase, capable of replacing the previously mentioned enzyme, will be useful for carrying out studies requiring the digestion of the fungal cell wall β(1,3)-D-glucan. This new commercial endo-β(1,3)-D-glucanase will allow the study of the cell wall composition under different conditions, along the cell cycle, in response to environmental changes or in cell wall mutants. Furthermore, this enzyme will also be greatly valuable for other practical and commercial applications such as genome research, chromosomes extraction, cell transformation, protoplast formation, cell fusion, cell disruption, industrial processes and studies of new antifungals that specifically target cell wall synthesis.

E-EXG5AO
exo-1,3-β-D-Glucanase (Aspergillus oryzae)
Hide Message
We use cookies to give you the best possible experience on our site. By continuing to use the site you agree to our use of cookies. More information