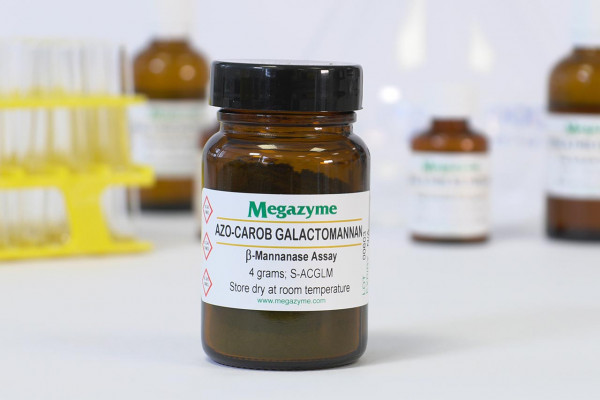 Substrate for the specific measurement of endo-1,4-β-D-mannanase.

A simple assay procedure for β-D-mannanase.

The polygalacturonase (PGU), hemicellulase (mannanase) and protease enzyme activities in commercial macerating, pectinase-enzyme preparations commonly used by wineries in Ontario (Scottzyme Color X and Color Pro) were measured under various simulated process conditions (temperature, pH, and ethanol concentration). Treatments included three temperatures (15, 20 and 30°C; pH = 3.0, 3.5, 4.0 and 5.0; ethanol = 0%), four pH levels (3.0, 3.5, 4.0 and 5.0; temperature = 15, 20, 30 and 50°C; ethanol = 0%), and four ethanol concentrations ((2.5, 5, 7.5 and 10%); temperature = 20°C and pH = 3.5.) Polygalacturonase enzyme activity in Color X increased linearly with temperature at all pH levels, and increased with pH at all temperature regimes. Polygalacturonase activity decreased with increasing ethanol. Color X mannanase activity increased with temperatures between 15 and 40°C, and decreased with increased pH between 3.0 and 5.0. Response of mannanase to ethanol was cubic with a sharp decrease between 8 and 10% ethanol. Protease activity increased linearly with temperatures between 20 and 40°C. These data suggest that the PGU, mannanase and protease components in these enzyme products provide sufficient activities within the ranges of pH, temperature, and ethanol common during the initial stages of red wine fermentations, although low must temperatures (<20°C) and presence of ethanol would likely lead to sub-optimal enzyme activities.

Fungi are important for biomass degradation processes in mangrove forests. Given the presence of sea water in these ecosystems, mangrove fungi are adapted to high salinity. Here we isolate Pestalotiopsis sp. NCi6, a halotolerant and lignocellulolytic mangrove fungus of the order Xylariales. We study its lignocellulolytic enzymes and analyse the effects of salinity on its secretomes. De novo transcriptome sequencing and assembly indicate that this fungus possesses of over 400 putative lignocellulolytic enzymes, including a large fraction involved in lignin degradation. Proteomic analyses of the secretomes suggest that the presence of salt modifies lignocellulolytic enzyme composition, with an increase in the secretion of xylanases and cellulases and a decrease in the production of oxidases. As a result, cellulose and hemicellulose hydrolysis is enhanced but lignin breakdown is reduced. This study highlights the adaptation to salt of mangrove fungi and their potential for biotechnological applications.

Palm kernel cake (PKC) is used widely in the animal feed industry but has limited use in poultry feed due to its high fibre and low protein contents. The major component of the fibre is mannan which is insoluble and difficult to digest. Therefore, isolation of local potential microbes capable of degrading mannan was explored from various sources such as peat soil, rotten oil palm trunks and raw PKC. The isolates were screened based on the clearing zone method on selective agar media containing Azo-carob-galactomannan as substrate. A total of 36 isolates were screened and only 13 had a clear zone ranging from 3.42 ± 0.02 mm to 5.44 ± 0.06 mm which were used for further analysis. These isolates were incubated in shake flasks at 35°C for 48 h with 10 g/litre PKC as substrate. The best enzymes producer was isolate IBRL F16.A4 with specific mannanase enzyme acitivity of 17.82 ± 0.05 U/mg, production of glucosamine at 9.84 ± 0.11 mg/g and mannose at 9.54 ± 0.06 mg/g. The isolate IBRL F16.A4 was identified as Aspergillus niger IBRL F16.A4 using a scanning electron microscope.

The primary objective of this study was to examine the effects of enzyme treatment on chemical compositions and production of reducing sugars in palm (Elaeis guineenis) kernel expeller (PKE). PKE was incubated in 80% water content at 55°C for 18 h with enzyme or without enzyme (as control). Crude protein (CP) and gross energy (GE) contents of PKE were not significantly different (P>0.05) between the control and enzyme treated PKE; averaged 17.95% for CP and 15.88 MJ/kg for GE. However, ether extract (EE) neutral detergent fiber (NDF), acid detergent fiber (ADF), hemicellulose and cellulose contents of enzyme treated PKE decreased (P<0.01) by approximately 34.6, 26, 20, 35.7 and 22.1%, respectively, compared with the control. Total content of reducing sugars (mannose, glucose and galactose) of the enzyme treated PKE increased by approximately 200 folds compared to the control (P<0.01). Enzyme treated PKE had higher (P<0.01) cellulase and mannanase activities but not α-galactosidase.

The aim of this study is to produce and profile the mannan-degrading enzymes from local fungal isolates by submerged fermentation and saccharification of PKC. Results showed that Aspergillus niger and Sclerotium rolfsii can produce mannan-degrading enzymes. The fungi were grown in submerged fermentation of PKC to produce mannan-degrading enzymes. The highest alpha-galactosidase was obtained on day 13 of fermentation (0.128 U mL-1) when using A. niger and on day 18 (0.126 U mL-1) when using S. rolfsii. Analysis also showed that enzyme activities for beta-mannanase using S. rolfsii were the highest at day 17 (3.166 U mL-1) and for A. niger (2.482 U mL-1) at day 8. Meanwhile the highest beta-mannosidase were obtained at day 16 for A. niger (0.128 U mL-1) and for S. rolfsii at day 16 (0.116 U mL-1).

Indirect method for quantification of cell biomass during solid-state fermentation of palm kernel cake based on protein content.

Solid-State Fermentation (SSF) of Aspergillus niger FTCC 5003 on Palm Kernel Cake (PKC) is a practical approach to upgrade PKC into value added product. Present study was conducted on Aspergillus niger FTCC 5003 growth profile and models that are able to describe the growth in SSF using PKC substrate. Due to the difficulties of separating cell biomass quantitatively from the substrate for SSF systems, indirect method for measurement of cell growth during SSF of PKC by Aspergillus niger FTCC 5003 was studied based on the estimation of glucosamine and protein content. Preliminary relationships between glucosamine and protein contents to fungal dry cell weight (Dw) were developed using simulated homogenous SSF data using glass beads as support materials. Both glucosamine and protein contents were well correlated to the fungal dry cell weight in SSF on support materials for protein and glucosamine, respectively. The equations obtained were used for the estimation of cell biomass profile during SSF of PKC from the data of glucosamine and protein as growth indicator study. The estimated fungal dry cell weight based on protein concentration and β-mannanase activity as metabolic activity for microbial growth were well correlated to PKC dry weight which, indicating that both were suitable marker in describing the growth of A. niger FTCC 5003 in this system. In contrast, estimated fungal dry cell weight based on glucosamine concentration was not suitable to describe the growth of A. niger FTCC 5003.

The genome sequence of the hyperthermophilic bacterium Thermotoga maritima encodes a number of glycosyl hydrolases. Many of these enzymes have been shown in vitro to degrade specific glycosides that presumably serve as carbon and energy sources for the organism. However, because of the broad substrate specificity of many glycosyl hydrolases, it is difficult to determine the physiological substrate preferences for specific enzymes from biochemical information. In this study, T. maritima was grown on a range of polysaccharides, including barley β-glucan, carboxymethyl cellulose, carob galactomannan, konjac glucomannan, and potato starch. In all cases, significant growth was observed, and cell densities reached 109 cells/ml. Northern blot analyses revealed different substrate-dependent expression patterns for genes encoding the various endo-acting β-glycosidases; these patterns ranged from strong expression to no expression under the conditions tested. For example, cel74 (TM0305), a gene encoding a putative β-specific endoglucananse, was strongly expressed on all substrates tested, including starch, while no evidence of expression was observed on any substrate for lam16 (TM0024), xyl10A (TM0061), xyl10B (TM0070), and cel12A (TM1524), which are genes that encode a laminarinase, two xylanases, and an endoglucanase, respectively. The cel12B (TM1525) gene, which encodes an endoglucanase, was expressed only on carboxymethyl cellulose. An extracellular mannanase encoded by man5 (TM1227) was expressed on carob galactomannan and konjac glucomannan and to a lesser extent on carboxymethyl cellulose. An unexpected result was the finding that the cel5A (TM1751) and cel5B (TM1752) genes, which encode putative intracellular, β-specific endoglucanases, were induced only when T. maritima was grown on konjac glucomannan. To investigate the biochemical basis of this finding, the recombinant forms of Man5 (Mr, 76,900) and Cel5A (Mr, 37,400) were expressed in Escherichia coli and characterized. Man5, a T. maritima extracellular enzyme, had a melting temperature of 99°C and an optimun temperature of 90°C, compared to 90 and 80°C, respectively, for the intracellular enzyme Cel5A. While Man5 hydrolyzed both galactomannan and glucomannan, no activity was detected on glucans or xylans. Cel5A, however, not only hydrolyzed barley β-glucan, carboxymethyl cellulose, xyloglucan, and lichenin but also had activity comparable to that of Man5 on galactomannan and higher activity than Man5 on glucomannan. The biochemical characteristics of Cel5A, the fact that Cel5A was induced only when T. maritima was grown on glucomannan, and the intracellular localization of Cel5A suggest that the physiological role of this enzyme includes hydrolysis of glucomannan oligosaccharides that are transported following initial hydrolysis by extracellular glycosidases, such as Man5.

A family 26 mannanase produced by Clostridium thermocellum as a component of the cellulosome contains a domain which is conserved in mannanases from anaerobic fungi.

Cellulosomes prepared by the cellulose affinity digestion method from Clostridium thermocellum culture supernatant hydrolysed carob galactomannan during incubation at 60°C and pH 6.5. A recombinant phage expressing mannanase activity was isolated from a library of C. thermocellum genomic DNA constructed in λZAPII. The cloned fragment of DNA containing a putative mannanase gene (manA) was sequenced, revealing an ORF of 1767 nt, encoding a protein (mannanase A; Man26A) of 589 aa with a molecular mass of 66816 Da. The putative catalytic domain (CD) of Man26A, identified by gene sectioning and sequence comparisons, displayed up to 32% identity with other mannanases belonging to family 26. Immediately downstream of the CD and separated from it by a short proline/threonine linker was a duplicated 24-residue dockerin motif, which is conserved in all C. thermocellum cellulosomal enzymes described thus far and mediates their attachment to the cellulosome-integrating protein (CipA). Man26A consisting of the CD alone (Man26A') was hyperexpressed in Escherichia coli BL21(DE3) and purified. The truncated enzyme hydrolysed soluble and insoluble mannan, displaying a temperature optimum of 65°C and a pH optimum of 6.5, but exhibited no activity against other plant cell wall polysaccharides. Antiserum raised against Man26A’ cross-reacted with a polypeptide with a molecular mass of 70000 Da that is part of the C. thermocellum cellulosome. A second variant of Man26A containing the N-terminal segment of 130 residues and the CD (Man26A") bound to ivory-nut mannan and weakly to soluble Carob galactomannan and insoluble cellulose. Man26A' consisting of the CD alone did not bind to these polysaccharides. These results indicate that the N-terminal 130 residues of mature Man26A may constitute a weak mannan-binding domain. Sequence comparisons revealed a lack of identity between this region of Man26A and other polysaccharide-binding domains, but significant identity with a region conserved in the three family 26 mannanases from the anaerobic fungus Piromyces equi.

The genes man26a and man2A from Cellulomonas fimi encode mannanase 26A (Man26A) and β-mannosidase 2A (Man2A), respectively. Mature Man26A is a secreted, modular protein of 951 amino acids, comprising a catalytic module in family 26 of glycosyl hydrolases, an S-layer homology module, and two modules of unknown function. Exposure of Man26A produced by Escherichia coli to C. fimi protease generates active fragments of the enzyme that correspond to polypeptides with mannanase activity produced by C. fimi during growth on mannans, indicating that it may be the only mannanase produced by the organism. A significant fraction of the Man26A produced by C. fimi remains cell associated. Man2A is an intracellular enzyme comprising a catalytic module in a subfamily of family 2 of the glycosyl hydrolases that at present contains only mammalian β-mannosidases.

Crystals of an endo-β-1,4-mannanase (1,4-β-D-mannohydrolase, E.C. 3.2.1.78) from Pseudomonas fluorescens sub species cellulosa have been grown by the hanging-drop technique at 291 K over a period of one to two weeks to maximal dimensions of 0.17 × 0.17 × 0.25 mm. These crystals belong to the space group R32 (or R3) with cell dimensions of a = b = 155.4 and c = 250.8A (hexagonal setting) and contain three (six) molecules in the asymmetric unit. The crystals diffract to at least 3.2/k using a laboratory source and are suitable for structure determination.

K-GALM
Galactomannan Assay Kit
Hide Message
We use cookies to give you the best possible experience on our site. By continuing to use the site you agree to our use of cookies. More information