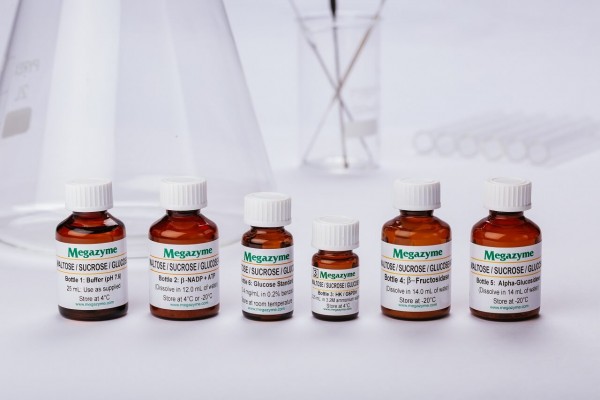 The Maltose/Sucrose/D-Glucose Assay Kit is suitable for the measurement and analysis of maltose, sucrose and D-glucose in plant and food products.

Note for Content: The number of manual tests per kit can be doubled if all volumes are halved.  This can be readily accommodated using the MegaQuantTM  Wave Spectrophotometer (D-MQWAVE). The studies on the effects of arabinoxylan (AX) polysaccharides on postprandial glucose response have resulted in contrasting results owing to the diversity in AX structures. Four water extractable AX (WEAX) extracts obtained from wheat aleurone and bran were used to investigate (a) the effect of AX on activities of α-amylase and α-glucosidase, (b) influence of AX chemical composition on their inhibition potency, and (c) kinetics of enzyme inhibition. α-Amylase activity was not significantly affected by the presence WEAX fractions regardless of type or concentration. WEAX inhibited α-glucosidase activity only when maltose was used as a substrate but not sucrose. The IC50 values of WEAX (4.88 ± 0.3-10.14 ± 0.5 mg/mL) were highly correlated to ferulic acid content (R = -0.89), arabinose to xylose ratio (R = -0.67), and relative proportions of xylose being unsubstituted (R = -0.69), disubstituted (R = -0.63), and monosubstituted (R = -0.76). The Lineweaver–Burk plot suggested an uncompetitive enzyme inhibition mode. Thus, our results suggest that antiglycemic properties of WEAX may be derived from direct inhibition of α-glucosidase activity.

Torulaspora delbrueckii in the brewing process: A new approach to enhance bioflavour and to reduce ethanol content.

Nowadays, consumers require fermented alcoholic beverages with particular and enhanced flavour profiles while avoiding the health concerns due to high ethanol content. Here, the use of Torulaspora delbrueckii was evaluated for beer production, in both pure and in mixed cultures with a Saccharomyces cerevisiae starter strain (US-05). The yeast interactions were also evaluated. In mixed fermentations with S. cerevisiae, the main analytical characters from T. delbrueckii were comparable with those of the S. cerevisiae starter strain, but the beers were characterized by a distinctive overall analytical and aromatic profile. Indeed, there were interactions between S. cerevisiae and T. delbrueckii, with enhanced ethyl hexanoate (0.048 mg l-1) and ethyl octaonate (0.014 mg l-1) levels at the 1:20 and 1:10 inoculation ratios, respectively; while phenyl ethyl acetate increased in all mix combinations. The presence of T. delbrueckii resulted in reduced β-phenyl ethanol and isoamyl acetate levels, which are responsible for floral and fruity aromas, respectively. Beer produced with T. delbrueckii pure cultures had a low alcohol content (2.66%; v/v), while also showing a particularly analytical and aromatic profile.

To reach an integrated sustainable production site, it is important to analyse effects of technology changes. A “brewery model” has been developed which allows process modelling of a brewing facility. Besides the comparison of specific demand figures, it allows a holistic view of the production site and most importantly the modelling of energy demand profiles. Energy demand profiles in brewing vary significantly based on the chosen technology set. Furthermore they are notably influenced by production planning, heat exchanger surfaces and heat supply management. A reduction in energy intensity in the brewhouse processes will lead to the possibility to design heat supply equipment at lower capacity. The mashing process is an important candidate in considerations for heat recovery and low temperature heat supply. New temperature profiles in mashing can improve processing time, quality of the produced wort as well as enable the integration of low temperature heat in a better way.

Background: Cereal-based complementary foods from non-malted ingredients form a relatively high viscous porridge. Therefore, excessive dilution, usually with water, is required to reduce the viscosity to be appropriate for infant feeding. The dilution invariably leads to energy and nutrient thinning, that is, the reduction of energy and nutrient densities. Carbohydrate is the major constituent of food that significantly influences viscosity when heated in water. Objectives: To compare the sweetpotato-based complementary foods (extrusion-cooked ComFa, roller-dried ComFa, and oven-toasted ComFa) and enriched Weanimix (maize-based formulation) regarding their 1) carbohydrate composition, 2) viscosity and water solubility index (WSI), and 3) sensory acceptance evaluated by sub-Sahara African women as model caregivers. Methods: The level of simple sugars/carbohydrates was analysed by spectrophotometry, total dietary fibre by enzymatic-gravimetric method, and total carbohydrate and starch levels estimated by calculation. A Rapid ViscoTM Analyser was used to measure viscosity. WSI was determined gravimetrically. A consumer sensory evaluation was used to evaluate the product acceptance of the roller-dried ComFa, oven-toasted ComFa, and enriched Weanimix. Results: The sweetpotato-based complementary foods were, on average, significantly higher in maltose, sucrose, free glucose and fructose, and total dietary fibre, but they were markedly lower in starch content compared with the levels in the enriched Weanimix. Consequently, the sweetpotato-based complementary foods had relatively low apparent viscosity, and high WSI, than that of enriched Weanimix. The scores of sensory liking given by the caregivers were highest for the roller-dried ComFa, followed by the oven-toasted ComFa, and, finally, the enriched Weanimix. Conclusions: The sweetpotato-based formulations have significant advantages as complementary food due to the high level of endogenous sugars and low starch content that reduce the viscosity, increase the solubility, impart desirable sensory characteristics, and potentially avoid excessive energy and nutrient thinning.

Towards a FRET-based immunosensor for continuous carbohydrate monitoring.

In this report we have evaluated the potential of using fluorescence/Förster resonance energy transfer (FRET) in a competitive immunosensor for continuous monitoring of the carbohydrate hapten maltose. The cyanine dyes Cy5 and Cy5.5 were used as a donor–acceptor pair by conjugation to maltose-labeled bovine serum albumin (BSA) and the monoclonal antibody IgG 39.5, giving Cy5–BSA–maltotriitol (3.1/1/18) and Cy5.5–mAb39.5 (2.2/1), respectively. This antibody with weak affinity towards maltose showed full reversibility to both the free maltose and the maltose-labeled conjugate. It allowed us to measure continuously the maltose content by monitoring the FRET signal change over time due to displacement of Cy5–BSA–maltotriitol from Cy5.5–mAb39.5 inside a semipermeable capsule. A near 22% total increase was seen in the fluorescence intensity ratio I670/I700 in the presence of maltose, with a calculated EC50= 1.87 ± 0.13 mM (R2= 0.9984) from the sigmoidal dose–response curve at 25°C. Specificity of the immunosensor was shown with the structural analog to maltose, cellobiose, and it generated no detectable response. A minor drift in the sensor baseline was seen with 0.4% per 24 h, which was in the same magnitude as the signal-to-noise ratio, during the 4 weeks of measurements. The immunosensor was applied to crude samples of oat drinks for direct quantification of the maltose content. Overall, this work demonstrates the potential to use an immunosensor based on weakly binding antibodies and FRET technology for remote and non-invasive carbohydrate monitoring.

O-KTR
1-Kestose
Hide Message
We use cookies to give you the best possible experience on our site. By continuing to use the site you agree to our use of cookies. More information